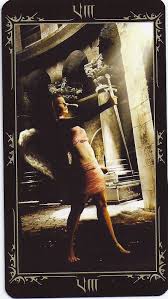 Image from The Dark Fairytale Deck by Luis Royo.

Mercy. What a waste. Astraea felt her fingers itch to touch the hilt of her blade. She was already tired of this mewling humans and their crying and hand wringing. They broke the terms of the treaty it was her job to make sure punishment was issued.

“Enough,” she snapped. The gray haired man groveling at her feet froze, watery blue eyes looking up at her blinking slowly. “I do not want to hear another word from your mouth.” His teeth made an audible clacking sound as his mouth literally snapped shut.

“There is nothing left to talk about. You have failed the Queen.” Her fingers did touch the cool metal of the sword this time. “There is only one way for this to end.”

Astraea let her large white feathered wings flex and then relax again. She was hard pressed not to smile when she saw the weak little man’s eyes widen. She knew they called her the angel of death and it did not cause her any sadness. They feared her and her sword. It was the way of the world.

She drew the shining blade and watched the dying sun catch fire along its surface. This was no dull piece of costuming or some piece of iron tainted trash, this was ht purest of metals, mined here in the mountains under the Queen’s own castle. The edge would never dull and the blade would never break. It was the blade of justice and it knew no mercy.

This was the part of her job she loved best, watching the fear bleed not resignation in their eyes. It would be over quickly, which was an unintentional kindness to those on the receiving end and a small disappointment for her. She brought the blade high, letting the light burn along it’s length, letting the man feel the weight of his sins pressing down on him as he waited.

“Astraea,” A cool voice said from the back of the room. “There is no time for dramatics. The Queen has called for you. The chariot is ready.” Her brother was such a bore. She brought the sword down swiftly and frowned as the red splattered across the pristine white of her wings.

“Honestly, brother, you have no sense of timing,” she huffed. “You can clean up this mess.” Her bare feet made no sound on the cold marble tile, but the trail of red prints followed her almost to the hall. The room was silent, the delegation from the mortal queen started in horror at the growing pool of blood the winged Fae had just walked through and dared not move, even when the black winged Fae sighed and approached them, gesturing to a couple of smaller kin to collect the remains of the now dead man.

“She has no idea how had it is to get blood out from between these tiles,” he groused to himself, looking at the mess. “She needs to find a better way.”

One thought on “8-Justice”

Welcome to our blog.